Housing market on course for busiest year since global financial crisis
The stamp duty holiday and the pandemic-led 'search for space' are set to lead to the highest level of homes changing hands for 14 years.
The housing market is on course for its busiest year since the global financial crisis as the scramble for properties continues.
More than 1.5 million homes are expected to change hands this year, a staggering 45% more than in 2020, according to our latest House Price Index.
With the number of housing sales each year rarely exceeding 1.2 million over the last decade, this would mark the highest level of housing market activity since 2007.
As well as breaking a recent record, 2021 looks set to be one of the top 10 busiest years since 1959. 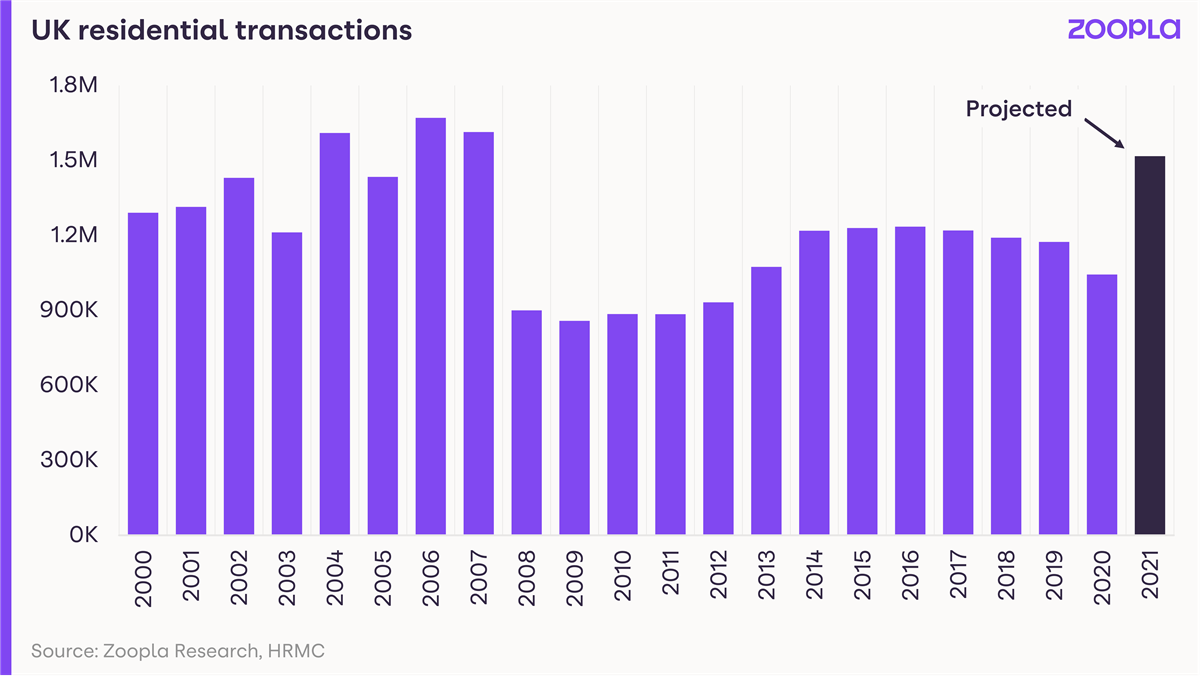 Meanwhile, the total value of homes sold in 2021 is expected to reach £461bn – up 46% or £145bn compared with 2020, and 68% compared with 2019. While this is largely being driven by the sheer volume of homes changing hands, it is also due to more expensive properties selling amid the pandemic-led 'search for space.
What’s happening to house prices?
House price growth has almost doubled during the past year to stand at 4.1% in April, up from 2.3% in the same month of 2020, as demand from potential buyers continues to outstrip the supply of homes on the market.
House price growth is strongest in areas where affordability is greatest. Wales leads the way at a regional level, with house prices up 6.3% year-on-year, followed by Yorkshire and the Humber at 5.4% and the north west at 5.3% respectively. At a major city level, Liverpool and Manchester have seen the highest levels of house price growth for the fifth month in a row at 6.9% and 6.8% respectively – twice the level recorded in the more normal markets seen between 2017 and 2019.However, price growth is slower in southern regions where affordability is more stretched. London recorded the slowest regional rate of house price growth for the sixth month running at 1.9%, well below 3.5% seen in the south west and east of England.
House prices in the heart of London are almost unchanged year-on-year. And a number of boroughs have actually seen price falls, reflecting the softening of buyer appetite in the capital during the peak of the pandemic.
Property values are 2.5% lower than a year ago in the City of London, while in the City of Westminster they are down 2.2%, and in Kensington and Chelsea, and Hammersmith and Fulham they have dropped by 1.7% and 1.4% respectively.
New from Zoopla